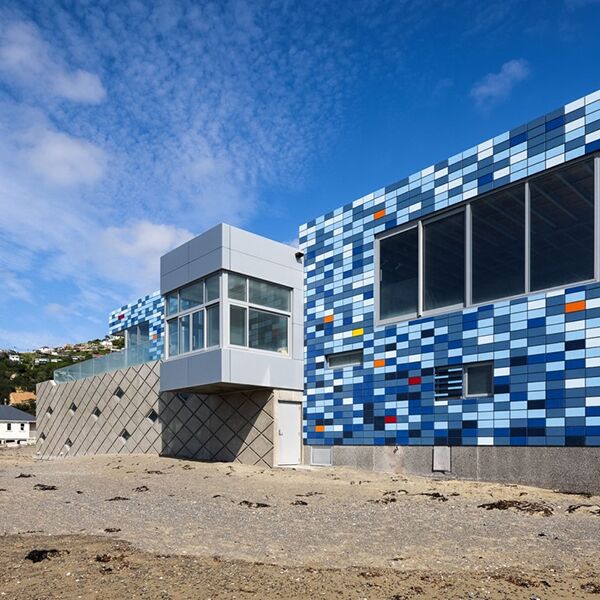 Lyall Bay, Wellington’s most popular surf beach, is on the south coast of the city, next to the airport. Lyall Bay Surf Lifesavers patrol the busy beach on weekends throughout the summer, and the club has a large active membership of approximately 300 club members who use the facility.

Opened in August 2021, the new clubhouse replaced an old wooden building that was built in 1957. It includes professional patrol and first aid rooms; changing rooms, showers, and lockers; spaces for training, education, and meetings; and a lounge and kitchen available for community hire.

Cameron Turchie, Club Captain of Lyall Bay SLSC explains that the old building had minimal security: “We just had your typical alarm panel, where we used a key to get in, disarm the alarm, and it was connected to a monitoring company.”

With the new building came the opportunity to explore security solutions to find the best fit for their needs.

“The main issue we had was getting a large number of keys back from members at the end of a season, it’s a lot of administration work. As we often hire the building out, we also wanted the ability to grant temporary access,” says Cameron.

With many people coming and going – from volunteer lifeguards, club members, venue hire groups, to caterers, and cleaners – and expensive equipment to protect, the club wanted an access control system where they could add and remove users easily.

“I explored various security systems and that’s when I came across Gallagher’s cloud-based security for small and medium business. One of the Gallagher team came and gave me a demonstration of the solution, and I thought, ‘this is perfect’,” explains Cameron.

Gallagher's security solution for small and medium business (SMB) is a cloud-based system that lets Cameron take control of the club’s security from anywhere, at any time, all from his smartphone. Everything he needs is at his fingertips, managed through the Gallagher SMB app.

“The SMB solution allows us to use our phones to grant temporary access, remotely lock and unlock doors, and the mobile credential replaces physical keys,” says Cameron.

“Being able to add people on the spot is also hugely helpful. I just enter their details into the app, grant access to the areas they need, and then their mobile credential is sent to them by email, so they can download the app to gain entry. It’s as easy as that.”

Cameron can activate the alarm from anywhere, at any time using his smartphone: “I’ve also set up a Late to Arm notification, so I’m notified if the club isn’t armed at night,” says Cameron.

The SMB solution also makes it easy for Cameron to self-monitor the site and manage security incidents, should the club’s alarm be triggered.

“False alarms used to be a weekly occurrence with the old security system, which started getting expensive, and given we are a charity, we must be conscious with money. That’s why SMB is great, we can monitor it ourselves and action it ourselves – I’m only five minutes away from the club myself, and other members are even closer.”

The SMB solution also makes it simple for the club to add, edit, and remove an unlimited number of users, and manage exactly which parts of the building they can access – even temporary users such as those who hire the venue.

“Not only can we easily assign access to those hiring the venue, and then revoke it after their booking, but we can ensure the areas of the club they don’t have access to are locked and secure,” says Cameron.

“The system provides peace of mind that the doors to our patrol room, where we store valuable lifeguard equipment, and our first aid room, are locked and secured while a function is going on upstairs.”

While the club members enjoy the ease of a mobile phone operated security system, some members use a Gallagher SMB Key Tag too.

“Due to the water environment we work in, if I’m going out in the boat I’ll take a Key Tag, rather than my phone. Our cleaner also uses a Key Tag to arm and disarm the building, as she finds it easier to wear around her neck than getting her phone in and out of her pocket,” says Cameron.

The Key Tag intrusion alarm functionality gives club members the ability to arm and disarm the club alarm by simply presenting the tag at an arming reader. This provides an alternative to the smartphone app alarm management already enjoyed by specified club members such as Cameron.

“The Gallagher cloud-based security system is ideal for our clubhouse, as we didn’t have to buy expensive equipment such as a server. All we need is the control panel in the building as everything is hosted on the cloud. We can also monitor the system ourselves to cut down our running costs of false alarm call outs.”

As a cloud-based system, Gallagher security for SMB requires no on-site server, or dedicated security staff. It is automatically kept up to date with the latest firmware, security updates, and functionality.

“The SMB solution is easy to use but does everything you need. It’s simple, cost-effective security that gives me peace of mind that the club is protected,” concludes Cameron.